Classical study is at the center of what a liberal arts education can be.

Students studying the classics develop their skills and competencies including: critical and analytical thinking, writing and oral communication, research, problem solving, initiative, adaptivity, and creativity. Sound familiar? These are often the skills employers want most. 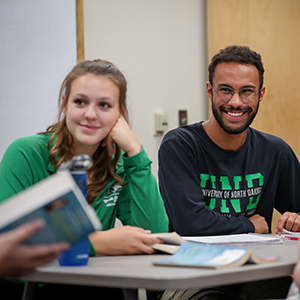 Introduction to Latin grammar and syntax, with selected readings from ancient authors. F.

Continued study of Latin grammar and syntax, with selected readings from ancient authors. Prerequisite: CLAS 101 with a grade of a C or better. S.

Introduction to ancient Greek grammar and syntax, with selected readings from ancient authors. On demand.

Continued study of ancient Greek grammar and syntax, with selected readings from ancient authors. Grade of 'C' or better in CLAS 151 recommended. Prerequisite: CLAS 151 with a grade of a C or better. On demand.

Study of literary and artistic representations of Greek and Roman mythology. Different methods of interpreting myths will also be explored. These include anthropological, philosophical and psychological approaches. On demand.

Conclusion of basic grammar and introduction to Latin authors, such as Cicero, Nepos, Petronius, or Phaedrus. Prerequisite: CLAS 102 or an equivalent approved by the department. F.

Readings in Latin literature such as the works of Catullus, Ovid, or Vergil. Prerequisite: CLAS 201 or an equivalent approved by the department. S.

This course will introduce students to a wide range of classical literature from ancient Greece and Rome. We will survey major authors from the following genres: epic, lyric, tragedy, comedy, history, philosophy, and oratory. These works will provide a window to Greek and Roman history, culture, and society. In our engagement with these texts we will attempt to understand them both in their own times and in our era, where they have long been fundamental to liberal studies. All readings are in English translation. On demand.

Conclusion of basic grammar and introduction to ancient Greek authors, such as Plato, Lysias, Xenophon, or Euripides. Prerequisite: CLAS 152 or an equivalent approved by the department. On demand.

Selected readings from works of ancient Greek literature, such as Homer's Iliad or Plato's Ion. May be repeated, with permission of the instructor, up to eight credits. Prerequisite: CLAS 251 or an equivalent approved by the department. Repeatable to 8 credits. On demand.

The ancient Greek and Roman tradition of epic poetry preserves some of the earliest, most influential examples of Western literature. This course examines the development of the Greco-Roman epic genre in the context of the political and social world of the Mediterranean region from its origins in oral performance traditions in the Bronze Age to the Roman Imperial period. Readings will focus on Homeric and Hesiodic poetry, Apollonios' Hellenistic epic Argonautica, and the Roman epics of Virgil and Ovid. All readings are in English. On demand.

Readings from major prose authors, such as Apuleius, Cicero, Sallust, Seneca, Livy, Petronius or Tacitus. Prerequisite: CLAS 202 or an equivalent approved by the department. Repeatable to 9 credits. On demand.

The playwrights fifth-century BCE Athens composed dramas whose beauty, elegance, and potency have endured into the twenty-first century. This course surveys the remaining works of the four greatest Athenian playwrights-the tragedians Aeschylus, Sophocles, and Euripides, and the comedian Aristophanes- in an effort to discover the mysteries and the continuing appeal of ancient Greek theater. Students will approach the plays from different perspectives and contexts-mythological, historical, cultural, theatrical, and more- in order to understand how they functions both as myth and as social commentary. All readings are in English. On demand.

Study of a specific author, genre (e.g. epic, tragedy, comedy), or special theme (e.g., war, the perception of women) in Greek and/or Latin literature. May be repeated, with change of topic, up to 9 hours. Repeatable to 9 credits. On demand.

Topic to be determined by the interest of the student and instructor. May be taken only with the consent of the department. May be repeated up to a total of 8 credit hours. Prerequisite: CLAS 202 or CLAS 252 or an equivalent approved by the department. Repeatable to 8 credits. On demand.