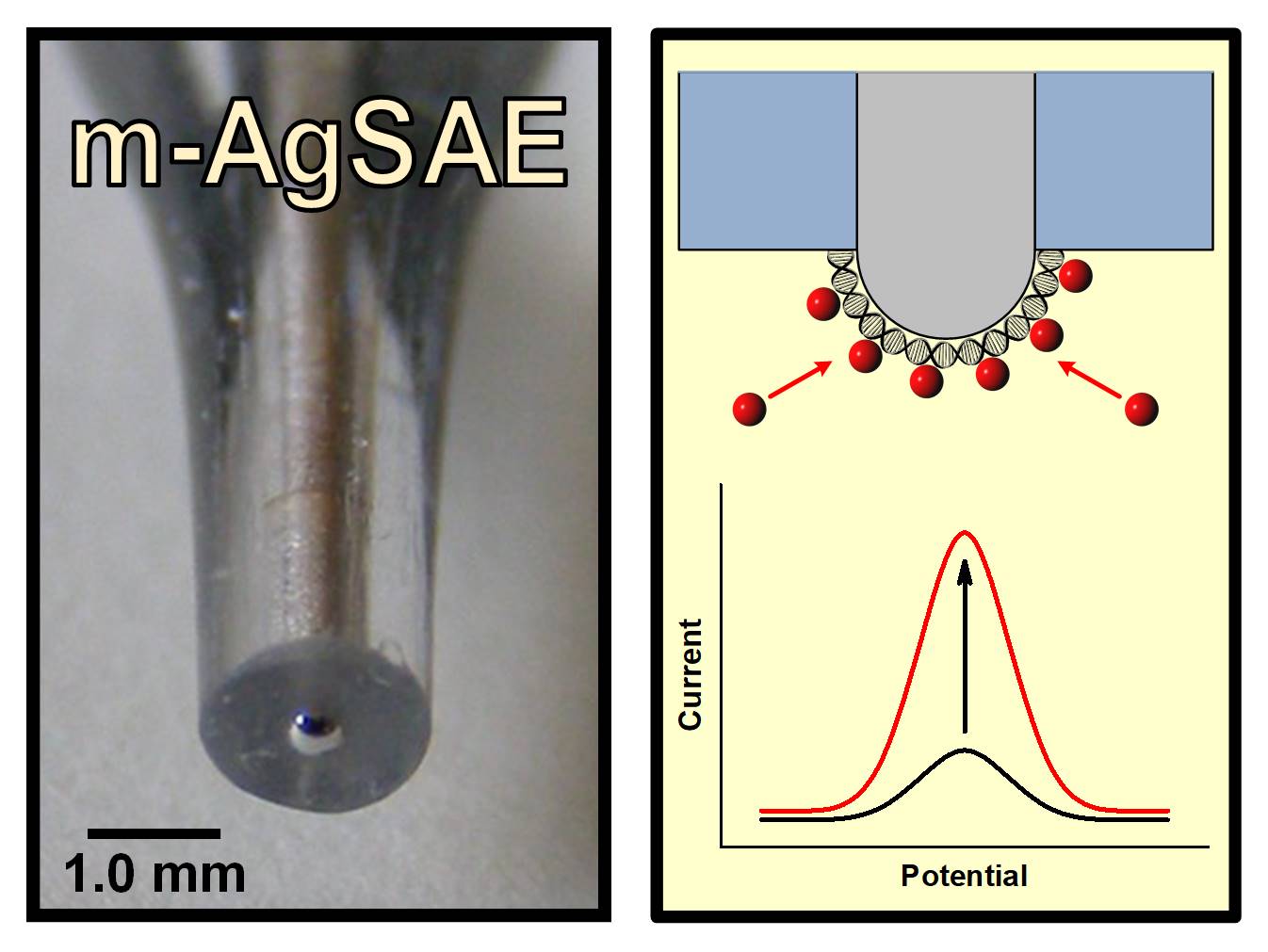 Development of novel electrochemical sensors utilizing a DNA layer immobilized onto a silver amalgam substrate, and their application for determination of organic environmental pollutants able to bind to double-stranded DNA to form a stable analyte–DNA complex.

The intended DNA biosensors should represent versatile sensors offering a variety of applications in electrochemical analysis of environmentally significant electrochemically reducible organic compounds. Designed to be stable and mechanically resistant biosensors for long-term use, they should also represent a cost-effective and mass-producible solution for current analytical practice.

Non-toxic electrodes based on silver amalgam (AgAEs) have been developed as viable alternatives to classical mercury electrodes. Mercury electrodes are unique because of their high sensitivity, reproducibility, and wide cathodic potential window; however, because of the toxicity fears with mercury, their use is currently either regulated or even banned. Very recently, we have designed a novel portable miniaturized electrode system (MES) based on an AgAE as the working electrode for voltammetric determination of electrochemically reducible organic compounds in small sample volumes.

DNA-modified electrodes (DNA biosensors) are prepared by immobilization of DNA onto a suitable electrode substrate. In the case of AgAEs, a DNA biosensor is prepared easily by immersing the electrode into a drop of the DNA solution. Such DNA biosensors can be used to develop highly sensitive analytical methods whereby organic pollutants (analytes) spontaneously adsorb to the double-stranded DNA structure (formation of a stable analyte–DNA complex) to increase the sensitivity of the determination. Moreover, using the above-mentioned MES, the whole analysis can be performed on-site.

In the first year of the project, the student will develop two completely new voltammetric methods for determination of the selected environmental pollutant (model representative of genotoxic polycyclic aromatic hydrocarbon derivatives or of anthracycline anticancer drugs): the first one using a non-modified AgAE and the second one using a DNA-modified AgAE.

The DNA layer formation, application, and removal will be the most important steps needed to be optimized. Special emphasis will also be placed on the investigation of mutual interactions between the selected analyte and double-stranded DNA. The newly developed methodology will then be applied to measurements with the portable MES in microliter sample volumes, and its general applicability will be verified by direct determination of the analyte in simple environmental matrices (e.g., drinking and river water). In the second year of the project, the developed biosensing system will be further improved, extended and applied to more complex matrices, based on our extensive experience with environmental electroanalysis.

UND IRES Program
Dr. Alena Kubatova
P 701.777.0348
alena.kubatova@UND.edu
We use cookies on this site to enhance your user experience.