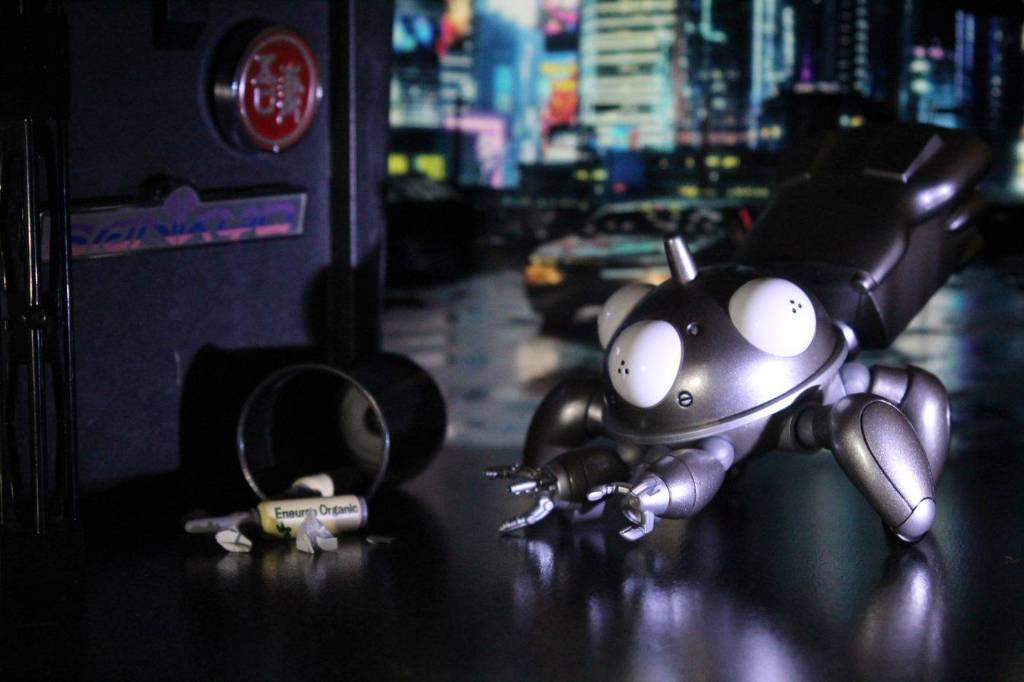 (Photo Credit: "Tachi in the Alley" by Richard Wilcox)

6:30PM. Wednesday, August 12th, 2089. Garbage day. In a large warehouse on the south side of the bay district, silent machinery began to click on and hum, running diagnostics on the larger machines within. The dark room filled by pinpricks of flashing lights is suddenly illuminated by the opening of a doorway. In the darkness, large metal shapes sit silently. The room is lit up now, and a man in a grey uniform walks the ranks of car-sized robots. His name is Oyama Williams, the chief sanitation officer.

At the end of the room, his hands meet with a clunky keyboard hooked up to a screen that’s ancient by modern standards. He reads the display:

Oyama presses yes. There is a sound of moving metal behind him as the night begins.

TCHI-244 comes online and looks at the room around it. It does not remember that it has seen this same room thousands of times, every Wednesday, for almost ten years. Mounted on its large, spider like body are three rotating “eyes,” which to the casual viewer resemble large white bowling balls. The eyes allow the robot to see everything around it. It looks at the wall behind it, the seven other robots, and finally the man in the grey uniform who is approaching from the left. Facial recognition kicks in, quickly matching the old, wrinkled face of Oyama Williams to his virtual sanitation department profile. Mr. Williams and a handful of other employees are the only people TCHI-244 can recognize, or even name. More complex memory systems on such a basic robot would be a waste of money.

“Good evening Mr. Williams!” The robot says in a high-pitched, girly voice designed to sound approachable. The robot does not know what evening is, only that it must say this every time it sees Mr. Williams. “Wonderful weather we’re having!”

Mr. Williams laughs at this. A terrible downpour soaked him on the way into the warehouse, and his grey jumpsuit is clearly heavy with rain. Around the room, the other seven robots come online saying similar phrases in similar yet different female voices. Mr. Williams doesn’t like this. They sound too real, yet they have no faces, only silver spider bodies and big bowling ball eyes. He raises his hand, the chatter ceases. He walks over to TCHI-244, who sounds eerily like his daughter. Because of this, he has given it a nickname, another thing that the robot is allowed to remember.

“Ready to work tonight, Tachi?” he says, waving a diagnostic pad over its body, scanning for anomalies.

“Sure am!” Tachi says, flexing its large, three fingered front claws as if it was cracking its knuckles.

Mr. Williams checks the pad, which reads out its last item:

“Will do!” Tachi says, its eyes swiveling in unison to regard Mr. Williams.

Mr. Williams stands and checks the next robot in line as Tachi disconnects from its power cords. On the bottom of its four stubby legs, powerful little wheels slowly push it out of the warehouse garage into the cold city streets beyond.

The street outside the warehouse is packed with cars, new electric types that automatically drive their passengers to various destinations. Most are full of businessmen; others are completely empty. The cars fling by on the road, headed out to the suburbs. Tachi stands next to the road for a moment before the cars sense its presence. Slowly, a Tachi-sized opening in the mass of vehicles appears. The robot quickly hops in and heads downtown just as fast as the cars.

San Angeles is a diverse city of millions. In the cold rainy night, massive black skyscrapers reach up above into the low hanging clouds. The streets are a collage of neon colors, massive glowing advertisements, and the occasional unlit building, usually marked for demolition. Thousands live here in the massive housing units near the edge of the city. Thousands more die here every night, be it the gang violence, corporate hit squads, or the occasional but rare “accident.” But as the saying goes, there are no accidents in San Angeles.

Tachi weaves down the freeways not caring about any of this. It is not an enforcement drone, nor a street cleaner or a bulky construction droid. Tachi is built for only one thing: garbage collection and disposal. Tonight, Tachi is cleaning sector six, known to the citizens of San Angeles as the “historical district.” The buildings here are run down, grimy, and not very well lit. Traffic is thinner here. Most people who live here can’t afford auto-cars anyway. As Tachi begins to slow down to enter its first alleyway, it’s a wonder no one ambushes it to try and strip it for parts. However, most people around here know better than to bother a sanitary robot.

As Tachi leaves the street, its wheels click off and it begins walking on its legs. Tachi maneuvers itself into the alleyway. Despite being the size of a small car, Tachi fits quite easily. It finds its target: two rusty dumpsters. Tachi’s eyes scan them in seconds.

Tachi walks to the first dumpster, grabbing it with its claws. The two stubby arms are stronger than they look; Tachi lifts the massive dumpster with ease. Attached to the back of Tachi’s body is a large box like apparatus, upon which a hatch slides open as Tachi lifts the garbage. One by one bags of trash fall into the open maw of Tachi’s back, and one by one they turn into puffs of scentless smoke. Tachi repeats the process on the next dumpster. Over and over again Tachi lifts dumpsters and incinerates garbage. Lift, dump, incinerate.

It is now about 10:30 PM, halfway through Tachi’s shift. However, the robot has hit an unexpected snag. Walking through another nameless alley, Tachi was suddenly hit by a bottle from above. Looking up, it spots the culprit: two people on a fire escape a dozen feet up. Both, a man and a woman, are clearly drunk. Tachi scans their faces, showing that the two are indeed not sanitation employees.

“Direct hit!” The man yells, swaying a little. The girl giggles and kisses him.

The man throws another bottle, one his girlfriend was about to drink from. It slams into Tachi’s body with a crash, followed by a triumphant yell from the drunks. The girl leans over the railing, yelling down at Tachi as her boyfriend rushes to keep her from falling. Tachi has been programmed for zero tolerance in this part of the city. A warning has been given. The robot scans its targets faces, checking not for names but range values instead. A small hole opens between the claws of its right hand, and there is a whoosh of air as the woman next to the drunkard is hit. The chemical mixture in the dart paralyzes her, and her boyfriend loses his grip. The woman falls and hits the pavement with a slap. The man tries to yell but is hit with a dart before he can react. His body crumples in the fire escape. Tachi links with the police network.

Tachi is not programmed to realize that the woman lying in a pile on the concrete is beyond unconscious.

Tachi reaches the last alley on its shift. As it lifts the first dumpster, it notices a group of four people on the other end of the alley. Three male, one female, at least that’s what the voice patterns indicate. Tachi ignores them, too focused on its job.

The woman is in the middle of talking: “…You owe me, and now you’ve made me get all soaked with rain so my men here can teach you a lesson.” The two other men, evidently her bodyguards, stand tandem to a crumpled figure. His face is soaked with rain and blood. “You understand I’m not very happy Joe,” the woman says, smiling and revealing her gold teeth.

Joe, the crumpled man at her feet, has been watching Tachi empty dumpsters. Tachi, his only chance of escape. With the last of his strength, he runs past the two suited bodyguards and collapses at Tachi’s side.

One of Tachi’s eyes regards the man, performing a facial scan. Sky Corp, in fact, produces most of the equipment used by the sanitation department, such as Tachi’s incinerator. However, this man does not work for sanitation, and so despite his savagely beaten face and his pleading tone Tachi only sees him as an obstacle.

“Now that was just stupid, Joe.” The woman says, waving for her companions, who grab Joe by his arms. “That thing will only call the cops if you’re tranqed. Now give me your Corp card. There’s gotta be some way you’re going to pay me back, even if you end up homeless.”

Joe tries to reach for his wallet. He is greeted with a punch to the face. Tachi reaches the last dumpster in the alley. One of the suited men throws the wallet to the woman, who thumbs through it until she finds what she was looking for. Joe is limp in the man’s arms.

“We’re done here.” The woman says. Apparently, so is Tachi.

“What about him?” One of the suited men says, thumbing to Joe.

The woman shrugs. “Put em’ in a dumpster, I don’t know.” She walks off.

The men look at each other and throw Joe in the last dumpster. As they turn to follow the woman, one yells to Tachi.

“Hey robot, you missed one!”

6:30PM. Wednesday, August 19th, 2089. Garbage day. The night goes the same as it did last Wednesday. Tachi, of course, does not remember last Wednesday, as its memory was wiped when it finished its shift. As far as Tachi (and later the sanitation department’s legal team) is concerned, last night never happened. But as Mr. Williams once again enters the warehouse, virtual connections are made, and Tachi remembers its job. Upon hearing Tachi’s evening greeting, Mr. Williams again remembers his daughter, who would have been twelve years old that day.

Mr. Williams says goodbye to Tachi as it walks out of the warehouse to enter traffic. Next to the warehouse doorway is a lamppost with a small sign on it.

Richard Wilcox (who most know as Hank) is an undergraduate at UND and double majoring in Communications and History.  He's enjoyed writing from a young age, and many of his works are inspired by sci-fi novels and short stories from the early 1900's. He also likes applying his historical knowledge to fiction, and occasionally writes alternative history pieces. He is obsessed with a future that is neon colored and perpetually rainy.