At the End of the Path 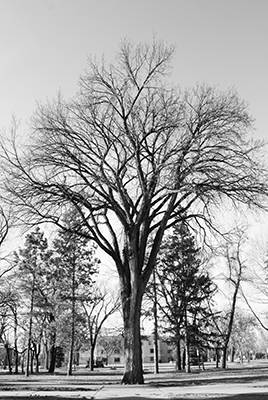 North of Montgomery Hall, an American elm towers. This tree stands taller than the surrounding pines and elms. It is about the same height as the building itself, as if the two had grown as one. This observation may not be far off the mark. Montgomery Hall was built in 1910, and old photos reveal that the elm was planted around the same time. As the furrowed tree trunk continued to grow and reach higher, Montgomery Hall also evolved. Initially, the building was known as University Commons and functioned as a dining hall. The Hall was later converted to a library before becoming a home to the counseling and behavioral sciences programs. Over the decades, the walls of Montgomery Hall have swelled with the knowledge and ideas of the professors, students and books that dwelled inside. Although the building is no longer in use, it still embodies mysteries: from the fourth floor which was sealed off in the 80s to the dead spiders hanging from their own webs in the basement.

Today, both the building and the tree are around 110 years old, but that is not close to the end of an American elm’s lifespan. In Maine, an elm by the name of Herbie was designated a historic landmark. Herbie stood on East Main Street in Yarmouth for 217 years. However, the elm north of Montgomery Hall is fated for a much earlier demise. The building is currently in the process of being demolished. By next semester, both Montgomery Hall and the American elm will be gone. Just as they began their story together, they will also end it together.

But the elm and Montgomery Hall are interlinked by more than their shared origins. As if strung together by the Moirai, a concrete path leads directly from the building to the tree. The presence of elms along pathways is not unusual in and of itself. American elms, due to their rapid growth and sturdy nature, used to be a popular choice for landscaping. Their popularity declined in the 30’s after the appearance of Dutch elm disease – a condition that was introduced to North America by European log shipments. The disease is spread by beetles and causes wilting; yet, many elms still remain on campus. What separates the elm outside of Montgomery Hall from the others is its positioning.

The elm stands, its trunk eclipsed by concrete, in the middle of the path leading to Montgomery Hall. At one point, the path may have led to University Avenue, but now, it stops abruptly behind the tree. After reaching out to ecologists and arborists on campus, I was no closer to finding records on the aimless direction of the path or placement of the tree. I only encountered more speculations that did not add up. The University of North Dakota is located on former prairie grounds, meaning that each tree was meticulously planted. Every aspect of the campus landscape was constructed with great care. Yet, at the end of the path, the elm stands: defiant of intention, grotesquely secretive, beautifully displaced.

What I know of the tree is only what I can see. Squirrels scale the stony trunk with ease, while crows perch midst the crown of crooked branches. A pale streak marks the splintering bark. This sight has become familiar to me, offering a reliable presence on my walks to and from class. Now, the tree serves as a reminder of life’s anomalies and ephemerality, and perhaps, a reflection of the university itself. Students attend college to learn and grow, and as we do, the campus grows and changes with us. And sometimes, a tree may be what suggests to us a way off the beaten path.

Thank you Dr. Kathryn Yurkonis, for your guidance in identifying the tree.
Thank you Jared Johnson, for helping with estimating the tree’s age.
Thank you Wyatt Atchley, for opening my eyes to the mysteries of our campus.

Jona L. Pedersen grew up on an island on Norway’s coast, but has since relocated to the US to pursue a degree in English with a minor in biology at the University of North Dakota. When they aren’t studying, they like to explore the outdoors, spend time with their two rats, and make art. In their writing, Jona aspires to capture the wonders of the natural world – creating stories which tread the line between reality and dreams.

Wyatt Atchley is a recent graduate of UND from Cambridge, Minnesota. He uses his passion for photography to supplement his studies in history and historic preservation.