Both philosophy and religion are concerned with the fundamental human questions, as well as the traditions to which they are attached. Areas of investigation include but are not limited to questions regarding the meaning of life, the ability to live ethically, and the human quest for the sacred. These concerns form the core of liberal arts education. 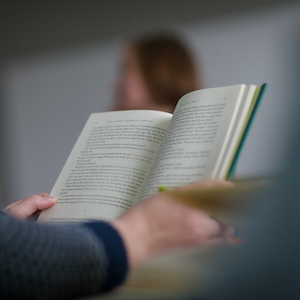 Learn more about program information, requirements, costs and aid, and how to apply.

Complete a B.A. in philosophy and get a J.D. in just six years. We offer a wide range of courses for every level of student, ranging from ethics to film classes, to a graduate seminar on data and artificial intelligence. None of these courses require prerequisites and our capstone course can be used for many different majors, not just ours. All of our courses have first-time philosophy students in them and our professors teach to every student in the room.

Ever wonder what philosophers think about when they watch your favorite television shows, series, films, and social media? In this course students will be introduced to the ideas of a variety of contemporary European philosophers vis-à-vis media productions. Students will critically investigate the nature of media technologies and their effects on the individual and society, as well as philosophical themes and dilemmas portrayed on the screen. Alongside reading primary philosophical works, seminar participants will view television episodes (from, for example, The Office and Black Mirror) and series (e.g. Severance), films (e.g., Psycho and Fight Club), and social media posts.

NB: This course is repeatable for up to 6 credit hours. Thus, students who have previously taken PHIL 331 on a theme different than the one being offered this semester—Philosophy on Screen—can enroll and earn full credit for this course.

ENROLL IN PHILOSOPHY ON SCREEN

This class begins with the study of some of the foundational Buddhist beliefs and practices documented in the earliest Pali scriptures. It proceeds to examine how these beliefs and practices were transformed and developed in later traditions of Theravada and Mahayana Buddhism that flourished throughout Asia. We will also consider the recent spread of Buddhism to the West and the challenges Buddhism has faced in the contemporary period. The goal is to leave the students with a greater appreciation for the enduring importance of Buddhist religion and philosophy in world civilization. In order to stimulate the greatest interest among the students, the focus will be on selections of classic texts. Two or three movies will be viewed to provide a sense of Buddhism in concrete life. Essential Studies: Humanities and Diversity of Human Experience.

Digital Ethics: We are not human beings; we are data. At least, this is what researchers, marketers, and Artificial Intelligence thinks of us. Yet, despite what they will have us believe, there is no neutral way of evaluating this data. Everyone has an agenda. Everyone has a point of view. And lots of
people are bigots, even if they don’t know it. In this course, we will look at the history of data
misuse and the ways it is currently abused, to develop an ethical theory that applies to new technology and research methods. We will engage with both the theory and practice of data ethics to
see if the great ethical theories still apply. This is a graduate seminar but is open to advanced
undergraduates. It is not a technical course and no experience with computer science or data software
is required. All the reading is accessible and intended for philosophical readers, not just data scientists.

Both philosophy and religion are concerned with fundamental human questions, as well as the traditions to which they are attached. The Department of Philosophy and Religious Studies is committed to creating an environment of dialogical inquiry both in and outside the disciplinary context. Areas of investigation include but are not limited to questions regarding the meaning of life, the ability to live ethically, and the human quest for the sacred. These concerns form the core of liberal arts education. The department maintains a major (with two concentrations in either Philosophy or Pre-Law) and two minors (Philosophy and Ethics), but also offers a wide range of courses in the disciplines of philosophy and religious studies accessible to students of many interests.

To receive announcements about our program, courses, research, and events, send your email address to our webmaster.