Spanish is the third most commonly spoken language in the world. UND's Spanish program gives you a significant edge in just about any career.

The United States is now second only to Mexico with respect to the number of Spanish speakers. The pivotal role of the Spanish language in today’s global economy and culture is undeniable.

The art, architecture, literature, cinema, dance, music, cuisine and popular culture of the Hispanic world are known, appreciated and studied around the world.

We encourage our students to study abroad, and have approved four programs (two in Spain, one in Chile and one in Perú) whose credits automatically fulfill requirements for the Spanish major/minor.

We also offer opportunities on campus for students to practice Spanish and experience Hispanic cultures outside of the classroom, including Mesa Española, Hispanic Film Series and the Organization of Latino Americans (OLA). 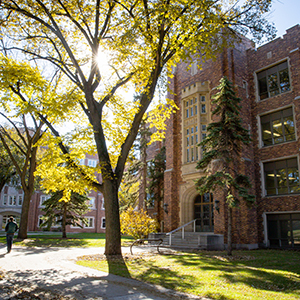 Major or minor in Spanish. Learn about program details, courses, cost, financial aid, and how to apply.